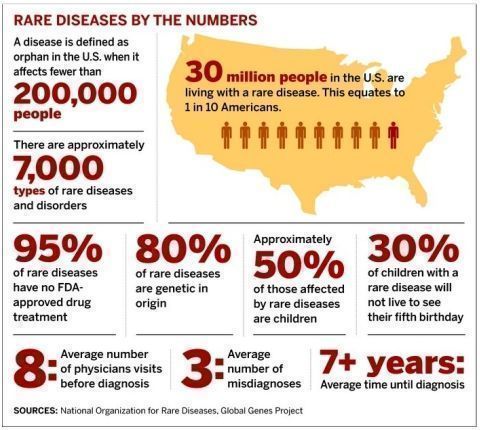 Rare diseases, when a disease is defined as such

All parents care about the health of their children. And they certainly wouldn't want to pass on to their offspring rare diseases that they are unknowing carriers of. Therefore, through preconception genetic testing, they can identify their reproductive risk early and avoid passing on recessive genetic diseases to their children.

Rare diseases, as they are defined

When a genetic disease is present in less than 1 in every 2 people.000, in a given population, is defined as rare 1 . Almost all genetic diseases are also rare diseases 2 . The prevalence of a rare disease can vary geographically, an example being thalassemia, a disease found more frequently in Mediterranean regions than in northern European regions. It is a genetic disorder involving severe anemia that develops as a result of a mutation in the globulin gene, a protein responsible for transporting oxygen in the blood. 2,3

Among the causes of rare diseases, in addition to genetic mutations, are allergies, infections, degenerative and neoplastic processes. 3

Currently on the list of rare diseases there are about 6.000-7.000, but it is an ever-changing list, partly because, due to the low prevalence of rare diseases, many have not yet been classified as such, even though they have the characteristics. 3

Rare diseases also include the cystic fibrosis, Affecting one in 2 people.500-2.700 and is caused by a mutation on the gene CFTR. If both parents are healthy carriers of the recessive mutation, the child will have a 25 percent chance of having this disease 4.5 .

They develop in childhood or at birth

Rare diseases include spinal muscular atrophy, neurofibromatosis, osteogenesis imperfecta, and Rett syndrome, which can present from birth or childhood; Huntington's chorea, Crohn's disease, amyotrophic lateral sclerosis, or cancers such as Kaposi's sarcoma or thyroid cancer, which can present in adulthood. 3

To date, there are no cures for most of the known rare diseases, only interventions that improve their various symptoms 3 .

Because of the high heritability of these diseases, it is advisable to perform a preconception genetic test, such as the Igea test, which indicates the likelihood of passing on a rare genetic disease, such as spinal muscular atrophy, Duchenne syndrome, X-fragile syndrome, metachromatic leukodystrophy, cystic fibrosis, Wilson's disease, to offspring.